Back to the Green Island with Efficient and Solar Stoves

In order to reduce CO₂ and counter the rapid deforestation on Madagascar, myclimate supports the manufacture and distribution of efficient cookers and climate-​friendly solar cookers. The sensibilisation of pupils about environmental protection and climate friendly cooking as well as the reforestation of two seedlings per cook stove sold are part of that project.

The Swiss-​Madagascan organization ADES (Association pour le Développement de l'Energy Solaire) has been producing solar cookers in Madagascar since 2002 and selling them at a reduced price to local households. Since 2010, the project has expanded its activities to the entire island and also included efficient cook stove models which perfectly complement the use of solar cookers when the sun is not shining. Today ADES offers a portfolio of nine different solar and efficient cook stove models for households as well as for institutional and commercial clients such as schools, children's homes and hospitals. The project operates stove production and distribution centres all over the island to serve customers all over Madagascar. Meanwhile, three camions are on the road as mobile promotion and information centres in predominantly rural areas in northern Madagascar. The remote Sava Region in the north of Madagascar has also been supplied since 2021. It is known as a global centre for the cultivation of vanilla. Since transportation to the region by land is very difficult, the stoves are transported from Tamatave to Antalaha and Vohémar by sea and from there distributed within the region using one of three lorries.

ADES is currently setting up various events to increase the population's awareness of environmental and health protection, eating healthily and fuel-​efficient cooking. With an innovative environmental education programme, ADES is bringing school children and their teachers closer to their native flora and fauna and motivating them to act in an environmentally friendly way.

The climate-​friendly cookers save up to 50 per cent of charcoal or firewood consumption resulting in valuable monetary savings for the household’s budget or time savings and less frequent gathering of firewood. Especially women and children benefit from the zero-​emission solar cookers or cleaner combustion of efficient cookers due to less exposure to smoke during cooking. The dissemination of efficient and solar cook stoves is an effective means to combat the quickly advancing deforestation in Madagascar and to reduce CO₂ emissions from the use of non-​renewable biomass. Additionaly, ADES finances two trees for reforestation each time a cook stove gets sold.

The  solar cookers are ideal to prepare traditional Madagascan food such as rice, corn, manioc, meat soup or chicken. However, this new way of cooking requires a change of cooking habits. For this ADES carries out special training and awareness building programmes to ensure appropriate and convenient use of the solar cooking technology.

Since 2017, biomass briquettes instead of firewood get used for firing the kilns. These so called artemisia briquettes are one meter long, weigh 10 kilograms and are made of the remaining biomass of the production process of antimalarial drugs. Together with the introduction of a semi-​industrial production, the energy efficient cook stoves can not only be produced more climate friendly, but also in a more efficient way and in a better quality. 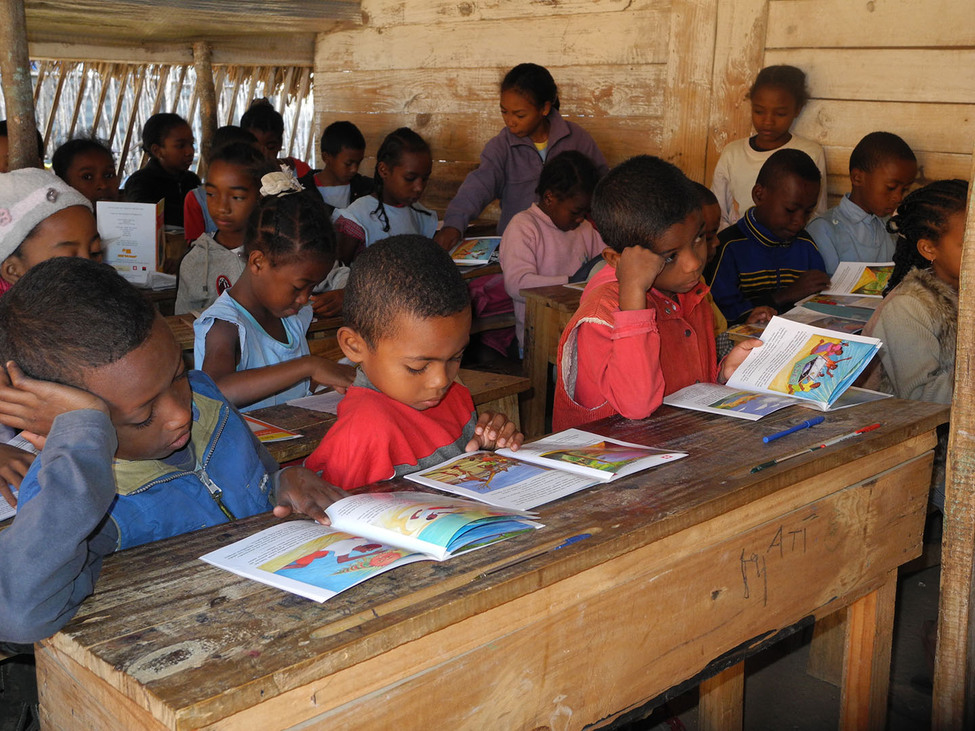 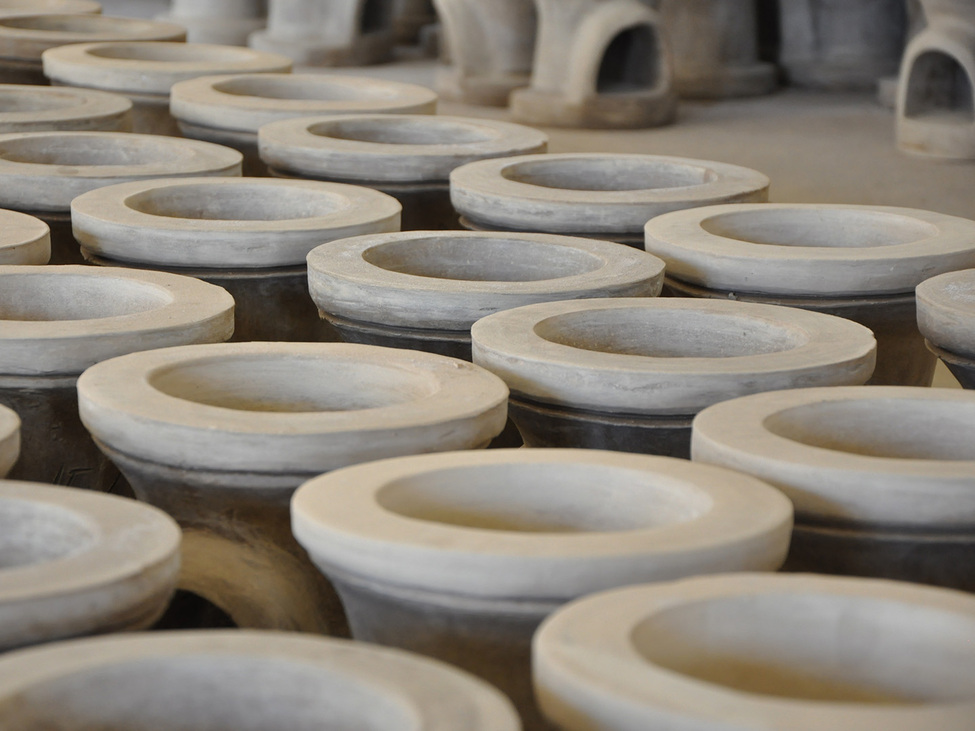 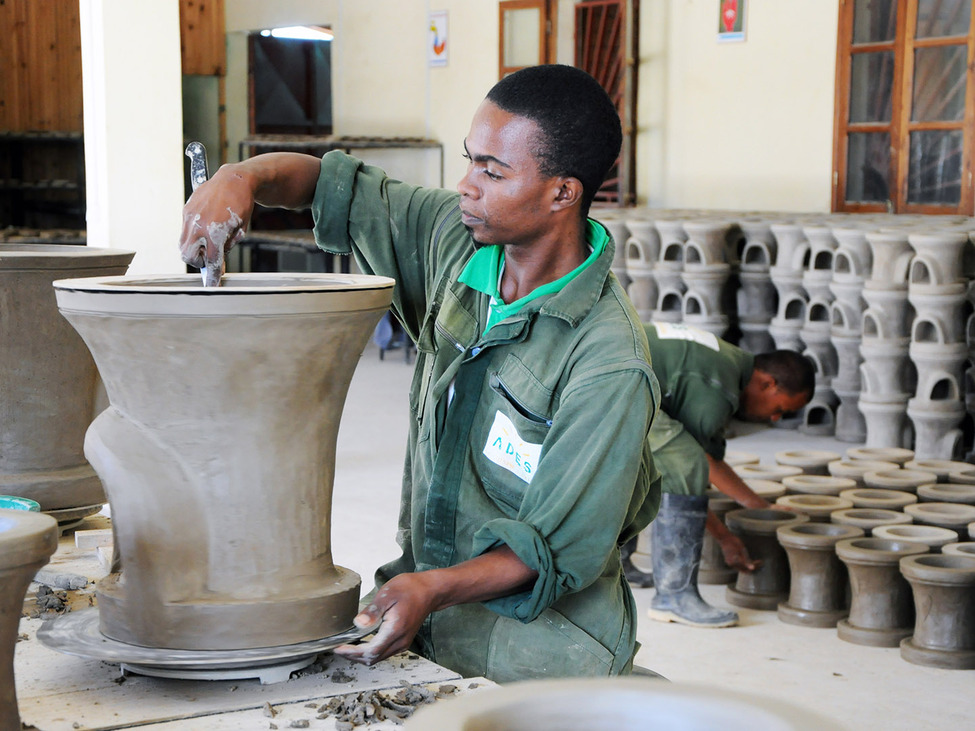 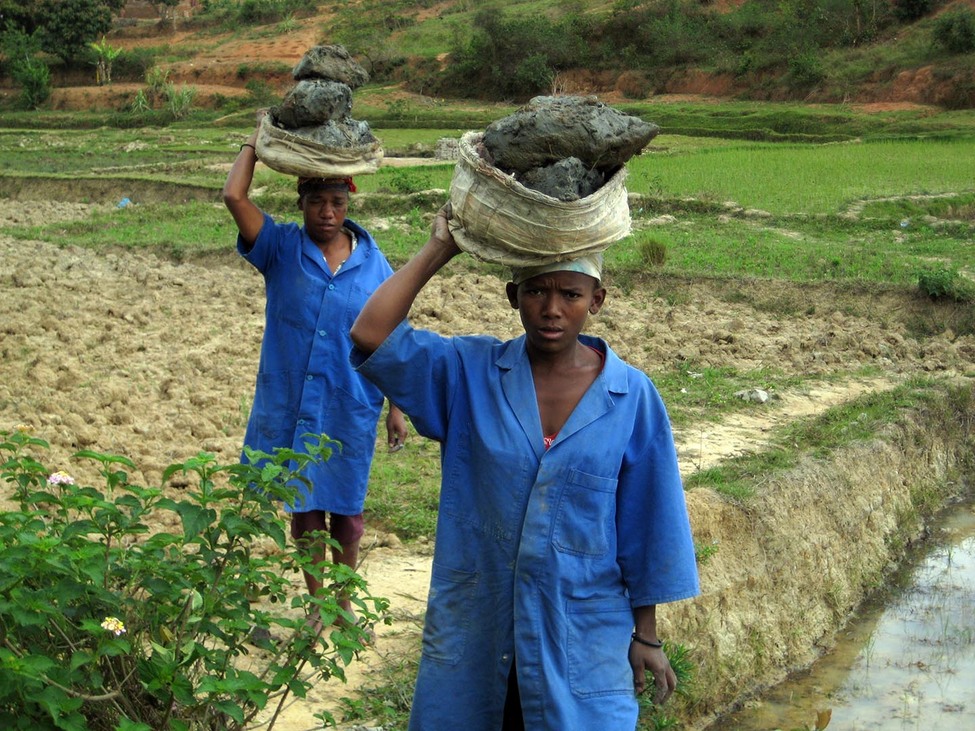 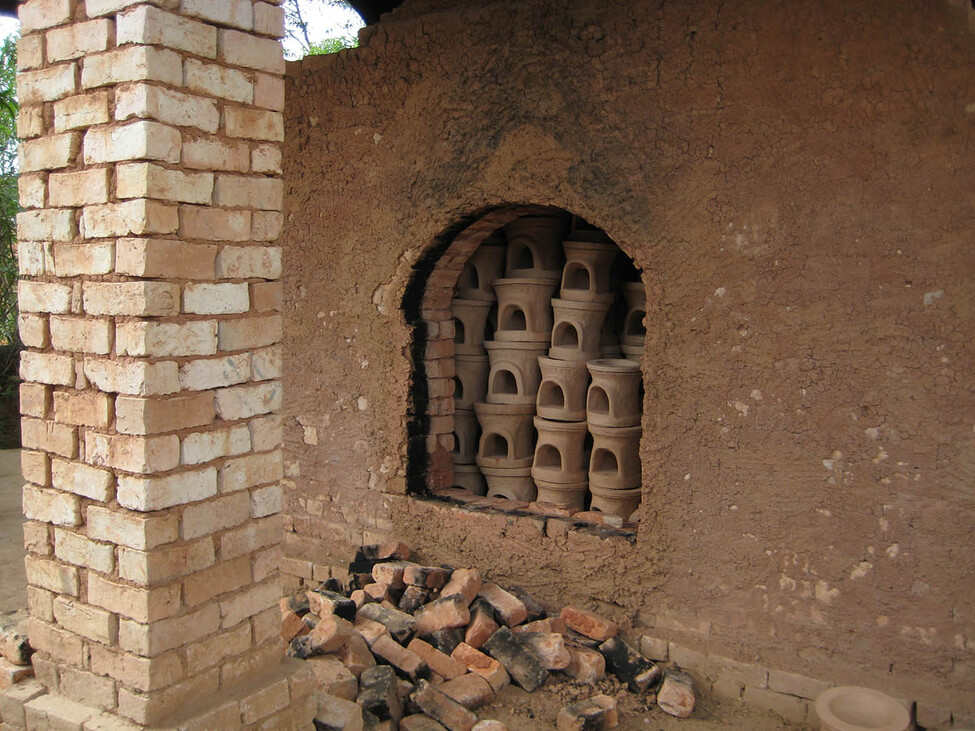 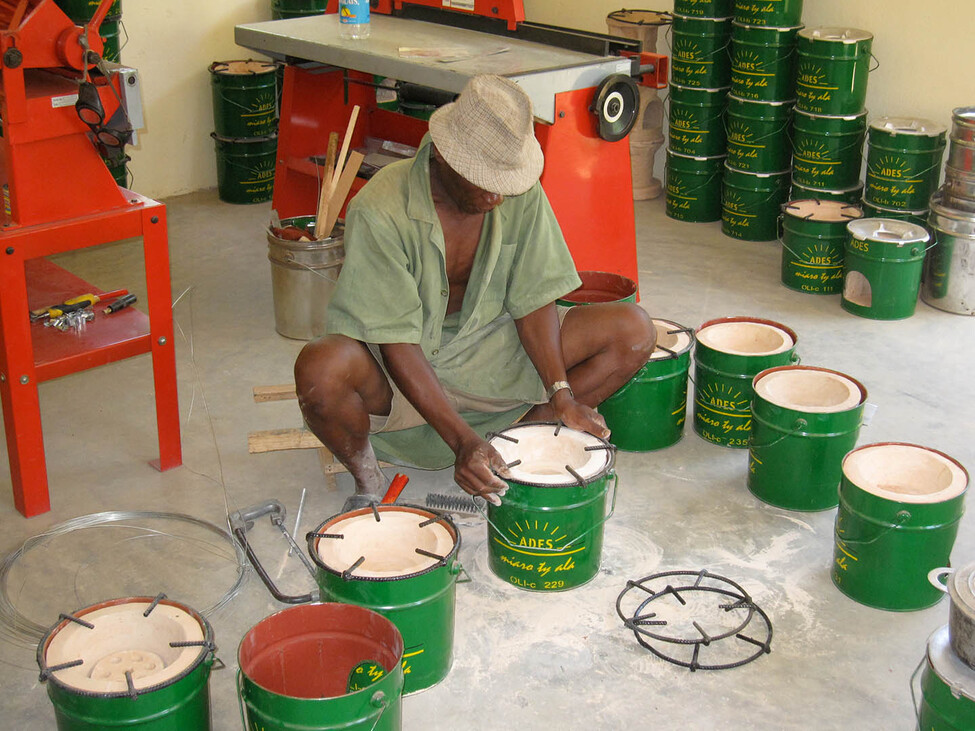 Children catching firewood. They have to walk many kilometres as there are almost no trees left. © Angela Zimmermann, myclimate 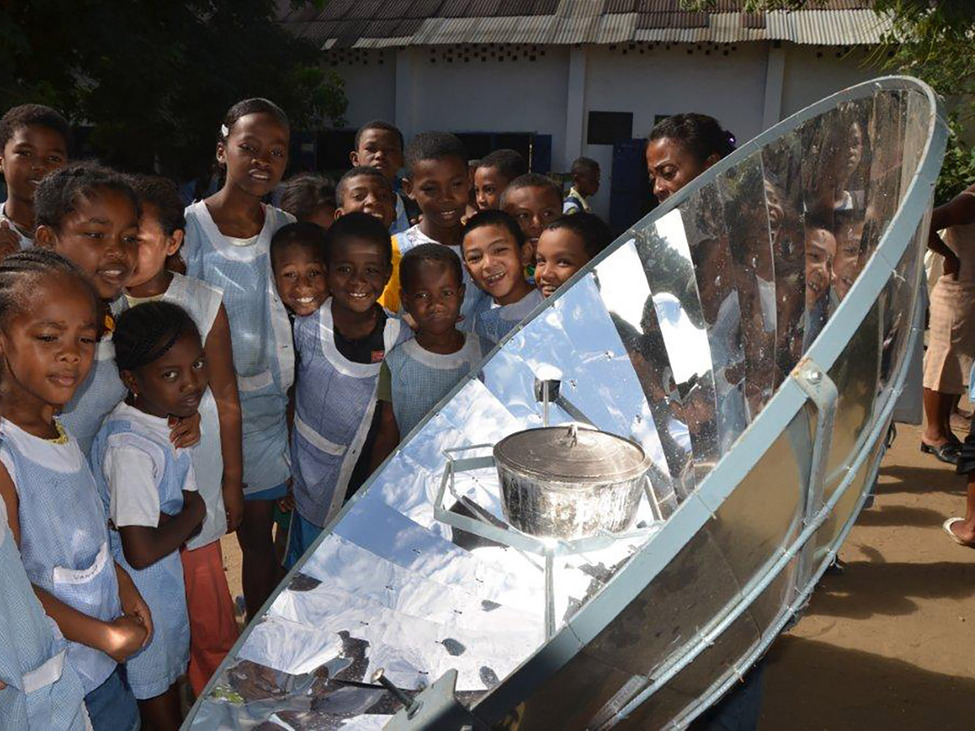 The "parabolic solar cooker" can be used to cook, bake, grill and fry but also to produce drinkable water or sterilise medical tools. © ADES, myclimate 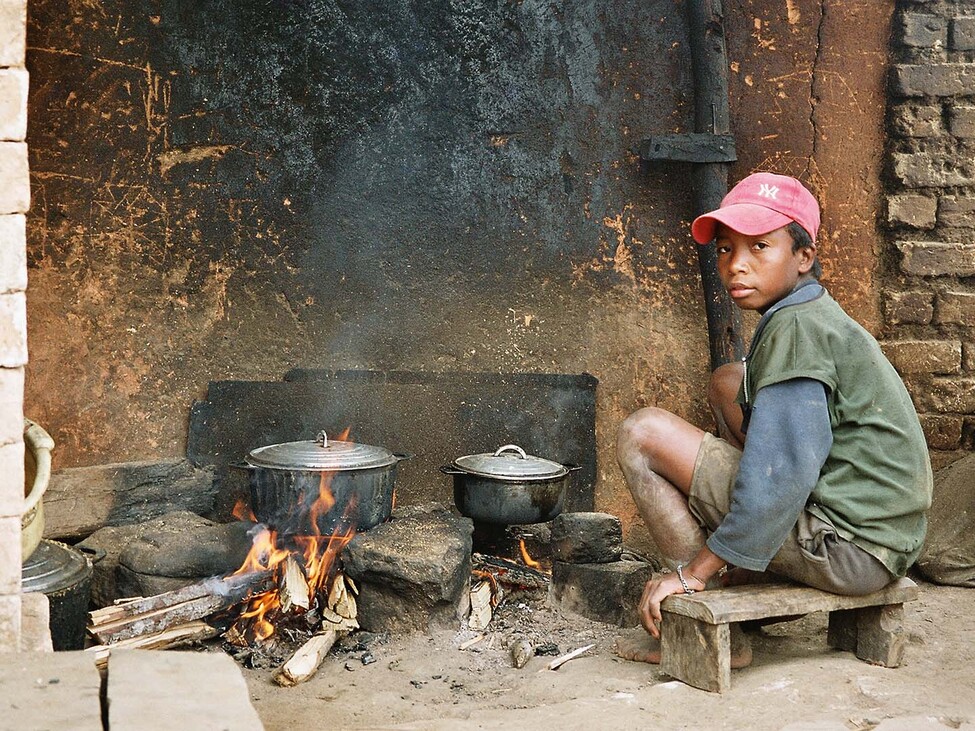 The tree-stone open fire is the traditional, polluting way of cooking. The extensive use of firewood has led to immense deforestation. © ADES, myclimate 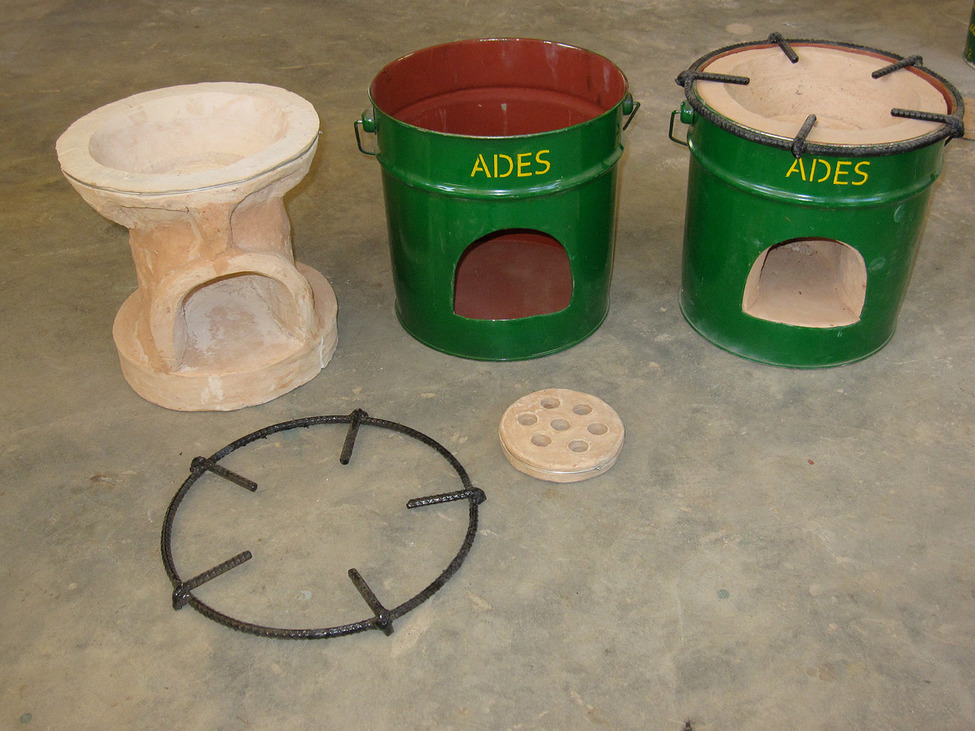 The energy-saving cookers consist of a combustion chamber made of fired clay, a coating made of tinplate and a top unit for pots. © ADES, myclimate