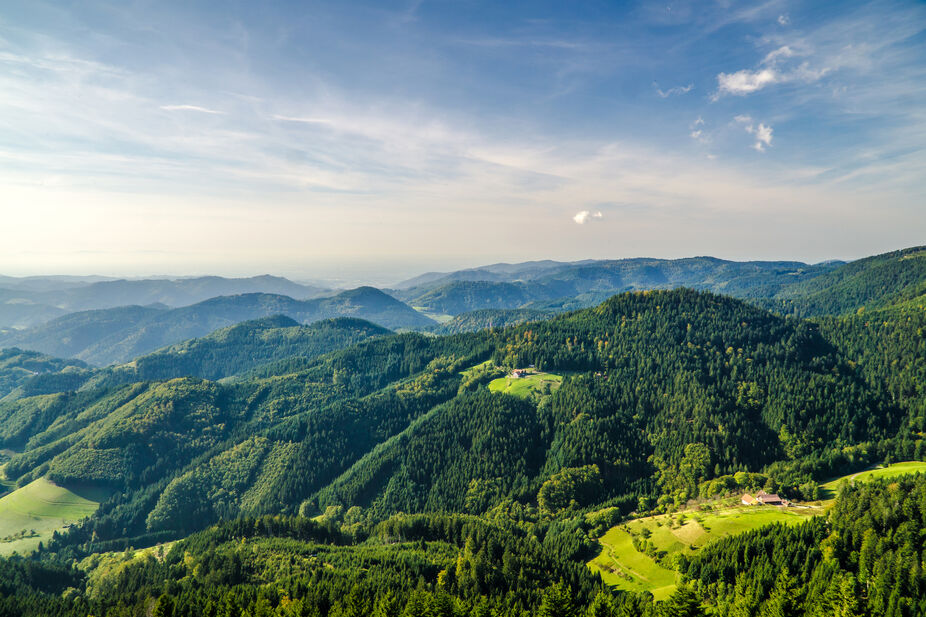 Here you will find frequently asked questions and answers on the topics of climate change, carbon footprints and climate protection.

What is a CO₂e footprint?
The CO₂e footprint aims to create a basis for measuring, evaluating and comparing the impact of human processes on the climate. It can be used to assess the emissions of companies, industries, products, services, means of transport, etc.

Basically, a total of six climate-relevant greenhouse gases are recorded and converted into the CO₂ equivalent (CO₂e) “common currency”. There is a conversion factor for each greenhouse gas. However, such so-called emission factors also exist for energy consumption, transport, travel, paper, waste, food, etc. After data collection, all influencing variables are converted into CO₂ equivalents, thus resulting in the CO₂e footprint.

In addition, a scenario is described that shows the greenhouse gas emissions that would have been created without the climate protection project. The scenario is called the baseline. The difference between baseline emissions and expected project emissions results in the expected emissions reductions.

Greenhouse gas emissions from the manufacture of products and services that cannot be further reduced can be offset by purchasing CO₂e certificates, thus making them climate-neutral. For this purpose, CO₂e certificates are purchased in the corresponding quantity and then retired. Retirement is evidence that its owner has provided CO₂e compensation.

How is the CO₂e footprint calculated?
To calculate the CO₂e footprint, an inventory of all energy and material flows in the value chain is drawn up, to which the corresponding emission factors are then assigned. All direct, indirect and mobile emissions of climate-damaging greenhouse gases are to be included in the calculation and reported as CO2 equivalents. In particular, this serves to identify necessary potentials for reduction, to develop the corresponding measures and to evaluate their effectiveness.

The methodology is described in detail in international standards such as the Greenhouse Gas Protocol of the World Resource Institute and World Business Council for Sustainable Development or relevant ISO standards. 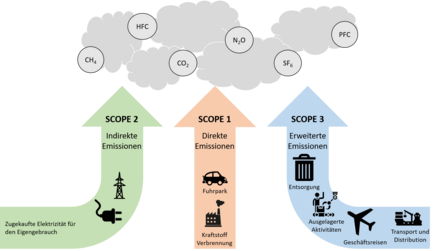 This is done either by completely emission-free manufacturing processes, or by emission-reduced processes whose remaining greenhouse gas emissions have been offset by an investment in a climate protection project. The greenhouse gases emitted by the production process have thus been saved elsewhere, which means that the process as a whole can be considered “neutral” in terms of the greenhouse effect.

In the company, the most important emission sources are recorded within predefined system boundaries. Emitters are, for example, electricity consumption, heating and cooling energy consumption, data on the vehicle fleet, on business trips, on employee travel, etc.

This allows the biggest sources of consumption as well as the biggest levers to be identified in order to reduce a company’s footprint in a sustainable way. The aim is to prevent as many emissions as possible and only offset unavoidable emissions by supporting high-quality climate protection projects.

It makes a difference globally in that it sends a signal that responsibility can be taken for environmental damage caused by business activity and that there are ways to reduce and offset it. In doing so, it contributes to creating awareness among its suppliers, employees and customers. The message is: Climate change is a serious problem for which there are many solutions if there is a consistent commitment to reducing greenhouse gases and offsetting the residual amounts.

Why is there often talk of “climate indulgences” when it comes to CO₂e compensation?
Some companies are desperate to be seen as green and offset huge amounts with the cheapest CO₂e certificates so that they can call themselves climate neutral. We find this irritating, because companies that are really committed and rack their brains over how they can save the last few tonnes of CO₂e are lumped together with them.

When those companies that are really serious about this issue also offset CO₂e, they are aware that this is only the second-best solution.
Nevertheless, we also want to make it possible for companies to offset their emissions. We take great care, however, to ensure that these projects meet the highest quality standards and the strictest criteria. Every project that makes it into our portfolio brings other social, environmental or economic benefits to the people and environment at the location of the project in addition to emissions savings.

This can be done through energy efficiency, switching to renewable energies and filtering greenhouse gases from power plants and production facilities, but also through reforestation or appropriate measures in agriculture.

Why do carbon offset projects take place in developing countries?
Due to the fact that greenhouse gas emissions disperse in the atmosphere, it does not matter where they are saved. That means they should be prevented where this can be done most efficiently.

Investments in developing and emerging countries are usually more efficient, as the effect per Euro invested is stronger due to differences in purchasing power. In addition, high-quality climate protection projects also have numerous additional benefits such as jobs, educational facilities, health facilities, quality of life improvements, etc. This can improve the situation of people in developing countries in general and, in the best case scenario, counteract possible migration.

What is emissions trading?
In Europe, North America, Australia and New Zealand, national or regional emissions trading systems have been introduced to regulate particularly energy- and emissions-intensive industries through a market mechanism, which, however, only covers a few sectors. Emissions trading reduces the emission of climate-damaging gases on a market basis, thus providing an impetus for investments in climate-friendly technologies.

There is a “mandatory market” and a “voluntary market”.

The “voluntary market” enables emissions offsets away from government regulations for responsible companies, organisations and individuals.

One tonne of CO₂e can be offset much more cheaply with a huge reforestation project in the Amazon rainforest in Brazil than through a small recycling and awareness-raising project in Romania.

What can I do to help?
Private individuals have a significant influence on the extent of climate change through their consumption behaviour. By changing lifestyles and reducing and reflecting on consumption, every individual can contribute to the reduction of greenhouse gas emissions.

On average, an Austrian emits 10 tonnes of CO₂e per year, which is far from an acceptable level. In order not to further fuel climate change, only 2.0 tonnes of CO2 should be emitted per person per year.

What can companies do to help?
Companies can design their value chain in such a way that as little energy as possible – and renewable energy at that – is consumed in their immediate sphere of influence, that material cycles are closed as far as possible and that materials are used that create few greenhouse gas emissions. Remaining greenhouse gas emissions can be offset by supporting high-quality climate protection projects. The conscious selection of suppliers in accordance with climate protection aspects also has enormous potential for multiplication.

In addition, the company can actively work to make its employees, customers and other stakeholders aware of the importance of climate change and set a good example.

How can I promote climate protection in the region?
Climate protection includes energy and material efficiency, short transport routes, environmentally friendly means of transport and the use of renewable energy in the form of wind power, hydropower, solar thermal energy, photovoltaics and biomass. In our region, the protection and rewetting of marshlands and the reforestation and regeneration of forests also contribute to the protection of climate and nature.

What is climate change?
Climate change generally refers to a change in global temperatures that results in numerous impacts. The extent of global warming can be strongly influenced by changes in the behaviour of each individual.

Climate change describes the phenomenon that the average temperature of the Earth’s surface has risen by an average of about 1°C between 1900 and 2020. The future temperature increase on Earth is projected to range between 1°C and 6.5°C, depending on the scenario, with the upper end of this range being very likely. Taking into account the increase in CO₂ concentration that has already occurred, a minimum global temperature increase of about 4°C is expected by 2100 – unless we change our behaviour. Because every individual can have a positive impact on climate change.

In our region, for example, an extension of the growing season can be observed, causing plants to sprout earlier in spring. In addition, extreme weather events such as storms, hail or heavy rain and floods have increased noticeably in recent years.

What are the expected consequences of climate change?
The consequences of rising temperatures are manifold and affect health, safety, the economy and the environment as follows

•    Health risks due to rising air temperatures and heat waves
•    Weather extremes such as floods, storms and dry periods, forest fires
•    Economic consequences for the elimination of consequential climate damage (the financial extent is difficult to predict – in some cases up to 15 per cent of annual global economic output has been assumed)
•    Increase in hunger and water crises, especially in less developed countries

Can anything be done about climate change?
Yes! And it’s not too late. On the one hand, by avoiding emissions and, on the other, by storing greenhouse gases that have already been emitted and protecting such stores (e.g. rainforests, marshlands, permafrost soils, etc.).

Emission savings are primarily achieved through more climate-friendly technologies. Carbon storage can be achieved through reforestation and agricultural measures that permanently increase the carbon bound in the soil.

Decision-makers in companies can ensure that climate-neutral or climate-friendly goods and services and renewable energy are purchased and that their own processes are designed to be as material- and energy-efficient as possible. The CO₂e footprint offers transparency and serves as a key figure that must be continually optimised. Currently non-avoidable greenhouse gas emissions can be offset by supporting high-quality climate protection projects.

Global warming is caused by the increase in the concentration of so-called greenhouse gases in the atmosphere, resulting in particular from the burning of fossil fuels (coal, gas and oil). This increases the so-called greenhouse effect: The short-wave radiation coming from the sun reaches the earth through the atmosphere, but the greenhouse gases only partially let the earth’s long-wave infrared radiation back into space. Another part is reflected and sent back to earth. This is one of the causes of the increase in temperature on Earth. The destruction of forests and intensive agriculture also play an aggravating role.

A second major cause is that, with the melting of the glaciers and ice surfaces, less heat radiation is reflected from the earth. Dark ground surfaces absorb much more heat than light or snow-covered surfaces. You are familiar with this effect: In the sun, light-coloured clothes heat up less than dark ones.

Feedback effects also play a role. For example, methane is trapped in permafrost soils and is released when these soils thaw. Another feedback effect is the increased amount of water vapour in the atmosphere, which is due to global warming. Water vapour is the most important greenhouse gas worldwide, contributing 60% to the greenhouse effect.